To share your memory on the wall of Richard Pikarsky, sign in using one of the following options:

To send flowers to the family or plant a tree in memory of Richard W. Pikarsky, please visit our Heartfelt Sympathies Store.

Receive notifications about information and event scheduling for Richard

We encourage you to share your most beloved memories of Richard here, so that the family and other loved ones can always see it. You can upload cherished photographs, or share your favorite stories, and can even comment on those shared by others.

Posted Feb 20, 2021 at 09:37pm
David & John,
My condolences and sorrow of hearing Uncle Richard passed I actually visited him on Harold St. early last year. I have very found memories of your mom and dad, your dad always seemed happy with a smile on his face . I remember very early in my life watching baseball games with your dad, uncle Gene, and uncle Bob, I was about 7. My dad enjoyed being with the boys. Take care cousins my heart goes out to you .
Comment Share
Share via:
DP

Posted Feb 14, 2021 at 11:35am
To Richards family, I had never met your father or anyone from your family. We are related, my name is Don Pikarsky. For 21 years, I worked for the Syracuse Police Department and never once did I stop over on Hood Ave to interduce myself. From my side of the family tree, that's how we are and it doesn't make it right. My condolence's to you for your loss.

Posted Feb 12, 2021 at 09:29pm
John and Kristen,
We are so sorry to hear about your dad . May you always find comfort in your memories of your dad.
God Bless.
Love always,
Bob & Karol Sanguine
Comment Share
Share via:
BB

Posted Feb 11, 2021 at 06:49pm
John and family,
I am so sorry to hear of your loss. I remember your dad coming into Wegmans. He was always pleasant to everyone.
With my deepest and heartfelt sympathy,
Becky 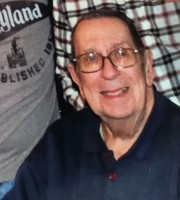