To share your memory on the wall of Charles \"Chuck\" Baker, sign in using one of the following options:

To send flowers to the family or plant a tree in memory of Charles "Chuck" R. Baker, please visit our Heartfelt Sympathies Store.

Receive notifications about information and event scheduling for Charles "Chuck"

Print
Services will be private.

We encourage you to share your most beloved memories of Charles "Chuck" here, so that the family and other loved ones can always see it. You can upload cherished photographs, or share your favorite stories, and can even comment on those shared by others.

I am sincerely heartbroken to learn of Mr. Baker's passing. I first had him as a teacher in tenth grade economics. His teaching style encouraged us to interact with one another, creating lifelong friendships for me. I later learned that Mr Baker was friends with my parents, a truly mind-blowing revelation to a tenth grader. I very much enjoyed running into him at various functions over the years and made it a point to pop into Best Buy whenever I was at the mall. The last time I saw him was at the Taft Road Wegmans. We had a very meaningful conversation and I am incredibly grateful for that. I am so sorry for your loss, he was a wonderful man. Sending love to you all.

Posted Nov 17, 2020 at 08:06am
Mr.Baker was my favorite Social Studies teacher.A real stand up guy.The world has lost a great. P.Moran
Comment Share
Share via:
JF

I am so sorry for your loss. I wish there were words that could bring you comfort. I will keep you all in my thoughts and prayers.
Comment Share
Share via:
M

Posted Nov 15, 2020 at 07:36pm
My deepest condolences to Chucks family. This is heartbreaking! I worked with Chuck at Best Buy for many years. I remember many many conversations that I thoroughly enjoyed. I could always count on him for the best advise. He will truly be missed and will hold a special place in my heart.
Comment Share
Share via:
RB

Posted Nov 15, 2020 at 05:27pm
Kathy and family.....Chuck was a favorite teacher friend of mine from Baker High School. We taught together for many years. He was always a steady, even -tempered guy, and we enjoyed many discussions about the kids we had in common. I always enjoyed working with him! Please know I am thinking of you all - and sending my best thoughts. May your wonderful memories help you during this very difficult time! Rockette
Comment Share
Share via: 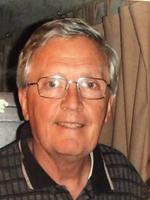