To share your memory on the wall of Lynn Henderson, sign in using one of the following options:

To send flowers to the family or plant a tree in memory of Lynn C. Henderson, please visit our Heartfelt Sympathies Store.

Receive notifications about information and event scheduling for Lynn

Print
A celebration of Lynn's life will be held at a later date.

We encourage you to share your most beloved memories of Lynn here, so that the family and other loved ones can always see it. You can upload cherished photographs, or share your favorite stories, and can even comment on those shared by others.

Posted Feb 06, 2021 at 11:26am
Lynn lived just down the road from me but I never knew her until later in life. I enjoyed going on several of the LaFayette Senior trips she planned and hosted, which I know was a lot of work for her...but a lot of FUN for the rest of us! She was kind, knowledgeable and giving to our Community, and she will be missed. I really enjoyed the trip we took to Letchworth State Park.
I'm sure she's on the other side now, enjoying her next great adventure, so wherever you are, THANKS Lynn!
Betsy Price
Comment Share
Share via:
DS

Posted Feb 04, 2021 at 10:16pm
My condolences to John, Judy, and Robert at the passing of your sister. I knew Lynn and you from Trinity Lutheran Church in Syracuse so many years ago. I only recently reconnected with John, who told me of Lynn's struggle with Alzheimer's. Despite the past year's emphasis on COVID deaths and caregivers, one must not forget the others. Having lost to Alzheimer's disease my father, two (much younger) cousins, and my mother-in-law, for whom we cared in our house in her final year and half, I know the stress and burden it puts on the caregivers, Judy I believe you were one of Lynn's, and bless you for your efforts.

Posted Jan 28, 2021 at 07:50am
COVID called a halt to our lunches together. She brought the coupons! ... was hoping we could get together again when it was over. . The trips she planned with the LaFayette Seniors were the best!
Comment Share
Share via:

Thanks Suzanne - she loved those trips, and loved planning them.
KS

Posted Jan 25, 2021 at 08:19am
So sorry to hear about your Mom Val. You and your family are in my thoughts and prayers.
All my best-Kathy Szczech
Comment Share
Share via: 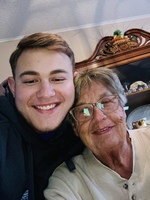 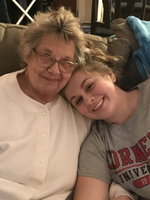