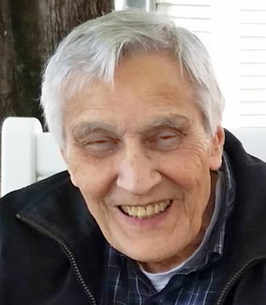 James C. Lamanna, Jr.
September 10, 2022
James C. Lamanna, Jr. passed away quietly in his sleep at Loretto Nursing Home on Saturday. He was a Syracuse native and life resident, except when he was a member of the US Coast Guard during World War II where he served on a U.S. Navy Destroyer Escort in the North Atlantic. When returning from the war he earned a bachelor’s degree from Syracuse University in English and Journalism. He eventually became a reporter at the Syracuse Post Standard and later became the news director at WFBL Radio. Then, for nearly 30 years, James was the Syracuse area’s public relations manager for Marine Midland Bank. He was predeceased by his wife, of over 60 years, Shirley (Brown). He is survived by his sons, Richard (Christine) and James; three grandchildren, Vincent, Lucas and Nicole. Calling hours are Monday from 4-7 at Carter Funeral Home 1604 Grant Blvd. Syracuse, New York. A Mass of Christian Burial will be celebrated on Tuesday at 10am in St. John the Baptist/Holy Trinity Church Syracuse, New York followed by Military Honors.